When we discuss car transportation apps we usually think of Uber and especially in Montreal, we move to a controversial tone. But there are other apps that make car transportation more innovative, more sustainable and more compliant, like Teo Taxi.

Montreal is becoming a pioneer in electric energies

If we come back five years ago, in 2012, the Montreal market was not ready for these kinds of applications but Patrick Gagné was. This innovator started a first app for booking taxis in Montreal but because of reluctant taxi companies, it was not successful at that time. Since then, he met with the right people and developed his passion for urban mobility and smart city initiatives and became one of the co-founders of Teo Taxi.

Today, Teo Taxi is a successful impact-driven project, innovating the taxi industry. It all started with motivated entrepreneurs and money. Initiated by billionaire Alexandre Taillefer and his growth capital fund XPND Capital, Taxelco is the corporation that drives Teo Taxi.

Instead of trying to change the mindset of taxi companies to use electric cars, Taxelco simply integrated a part of the value chain and bought one company, Taxi Hochelaga, in August 2015.

“Controlling the second-largest taxi network in Montreal was a big asset to implement change”, Patrick Gagné

With additional financing from Claridge Investment and public subsidies from the Caisse de dépôt et placement du Québec, Teo Taxi was launched in November 2015 with an exclusively electric fleet.

Working hand in hand with the Quebec province

This is obviously made possible by a good relationship with public services. Just like Uber, Teo Taxi is part of a pilot project from Quebec to position Montreal as a green and to turn public transports into responsible economic and social development tools. The province amended previous regulations to allow Taxelco to rent taxi permits. In the context of a new car electrification program, a $5-million grant was also given.

What makes the venture so attractive is its unique positioning, combining the tech innovation of an app with the professionalism of the traditional taxi industry.

“We are partners with the taxi industry and comply with local politicians’ expectations.”

A promising future in expansion 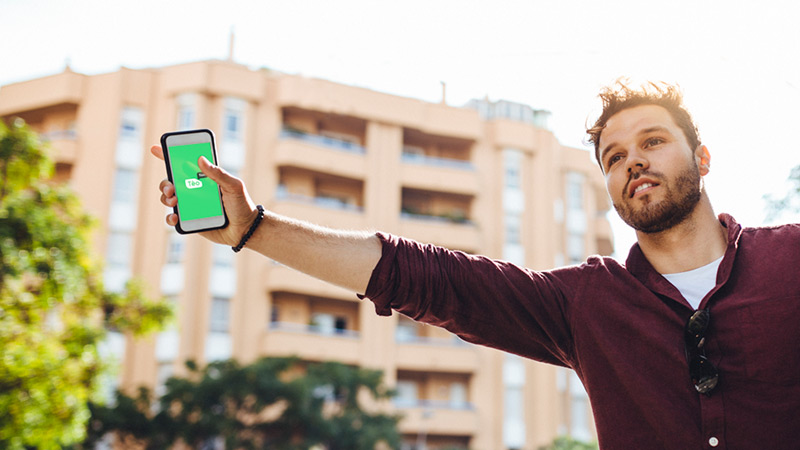 Teo Taxi owns its research infrastructure and its electric cars fleet (the very recognizable fleet of green and white Nissan Leaf, Tesla and Kia Soul vehicle). And Taxelco has a wider purpose. It has already started discussing similar projects in other cities in the world such as Winnipeg in Canada, Mulhouse in France, Colombus in the US (Ohio). Other projects also include launching electric taxibuses with the overall purpose that economic and social benefits are derived from the use of electric vehicles.