Today, Renaud Gouin has two microbreweries in Montreal, he has been one of the key industry innovators in the past decade, seeing the potential for hoppy beers. How did he become a brewer and entrepreneur? We will have a look at his journey, from HEC Montreal to Jukebox and Avant-Garde.

At first, Renaud didn’t like beer. Because beers were unflavored, standardised, industrial. When he discovered some Belgian beers, he realised that beer could be fruity with almost a non-existent bitterness.

During his studies at HEC Montreal he started home-brewing and discovered that he could actually brew beers that were above industry averages. He also found out that the community of craft beer lovers was a passionate and dynamic one, ready to share their knowledge and experience through social platforms like the MontreAlers on Facebook. Still an amateur, Renaud accepted a position at Desjardins as a Personal Finance Advisor and decided to explore his new passion further.

A potential for innovation

There is such a diversity of flavors in craft beers: fruity, sour, even salty flavors! Some hops like Citra can create flavors of tropical fruits, litchi, passion fruit, without adding any fruit in the brew! Some yeasts like Brettanomyces can give a sour taste of hay.

In Quebec, in the early 2010s, over 50 types of beers where still not accessible. There was one particular type that was still not adopted by industrial and medium-sized breweries: that of American Pale Ales and Indian Pale Ales. Their intense bitterness made everyone wince. But Renaud was already creating his own.

When Renaud the corporate vision of life, he decided to take a leap in entrepreneurship but he knew that he could not invest in the heavy and expensive equipment and open his own brewery. He had read a lot about contract brewing and how it succeeded in the US. Without equity, this innovation in manufacturing industry clearly eased the transition to being an entrepreneur for home brewers.

Renaud pitched his idea to Brasseurs de Montreal. At that time, they had never tried the model but as they were not into creating similar products, they decided to go for it. 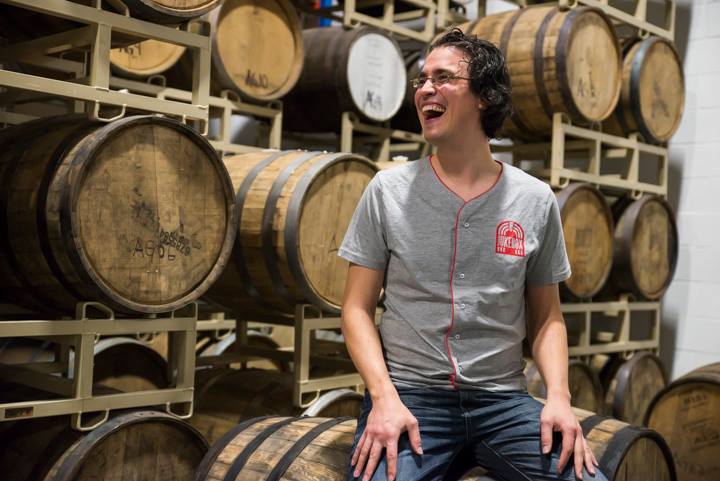 Renaud analysed the market and clearly saw an opportunity to catch:

He also wanted to innovate the branding and offer a disrupting image to his beers: unlike industrial or regionally focused images used by the other players, Renaud wanted to offer a whole new world: in 2012, he created his first microbrewery, Jukebox, around the world of rock music. The hoppy flavor of each of the products is as electrical as the guitar on the labels.

If amateurs and curious gourmets liked his new products, Renaud was still working part-time at Desjardins because he needed cash flow.

“Contract brewing was great for distribution and increasing sales revenues but it did not include representation and promotion which is a crucial part.”

“One thing is to be focused on growth but I am more interested in creativity, passion and innovation and contract brewing is a perfect tool for testing the market and testing new flavors”

Renaud had met with Shawn Duriez, an ex-brewer from McAuslan. They decided to create new innovative beers together and co-founded Avant-Garde. Shawn’s experience on the ground and Renaud’s entrepreneurial experience made them complementary.

Again, timing was of the essence: in 2016, they capitalised on another innovation in the industry: Julien Niquet and David Cayer, co-founders of Glutenberg, were launching Oshlag Brewery, and offering the first contract brewing service for craft breweries. Renaud and Shawn jumped at the opportunity.

With the high popularity of IPAs, they wanted to offer more classical beers while exploring new flavors. They focused their exploration on barrel-aged beers: the Porter Imperial Bourbon, for example, has a vanilla bourbon nose, mixed with coffee, caramel, even banana flavors. They also disrupt classical recipes with the Nocture Coco, an Imperial Porter made with an unconventional ingredient: coconut!